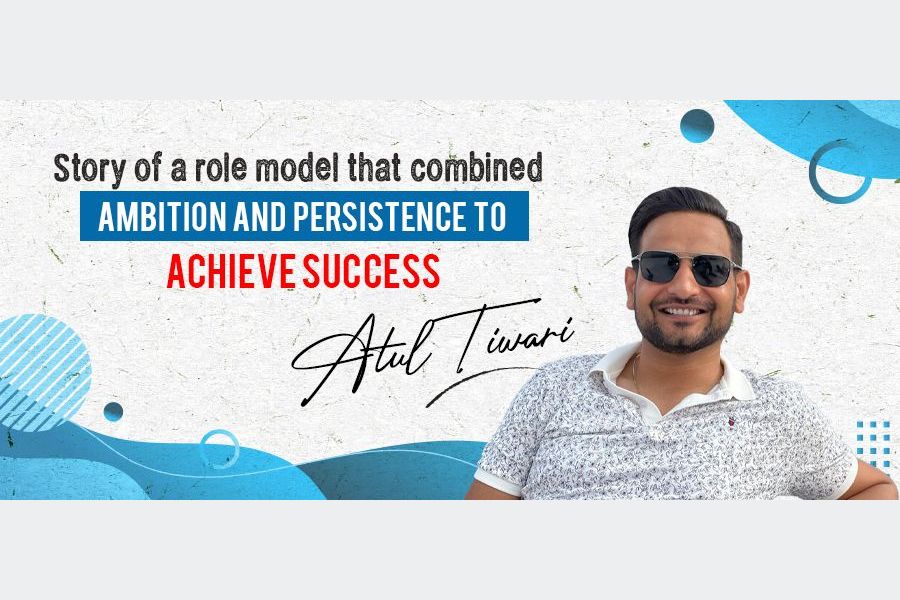 October 19: The path to success is difficult to develop; you have to encounter a lot of trials and tribulations in this path. Successful people don’t give up in the middle; they learn from their mistakes and use them to improve themselves. Failures give them experience, knowledge, and value while keeping them focused on achieving their goals. This helps them operate at higher levels at all times, as life provides them with the knowledge of doing the right things through their experiences.

Atul Tiwari, Zonal Head at Aditya Birla Finance Limited, is a reflection of all the above facets. He has proven expertise in the mortgage industry and is highly skilled in Business Relationship Management, Banking, Business Development and Team Management. His life journey teaches you that if you are focused on achieving the goals you have set for yourself, all conspiracy theories that life might present can be successfully overcome.

The story of Atul’s childhood and upbringing in Etawah, Uttar Pradesh was one of sustaining with minimum resources to pursue his burning desire for an excellent education. This ultimately prompted him to move to Agra, where he successfully completed his graduation in 2001. In order to finance his education as well as supporting his family, he began working at a chemist shop in 2002. In 2003, he got a small job at a DSA of Standard & Chartered in Kanpur.

The year 2005 was a year of mixed emotions – Atul had to cope with the loss of his parents that shattered him emotionally. However, professionally he received recognition for his dedicated work as he joined the Direct Sales Team Vertical as an Executive in Standard & Chartered. Four years of successful operations in Kanpur made Atul challenge himself to explore better opportunities and he requested to be transferred to India’s capital city. By 2011, his continued achievements were recognised as he became an On-Roll employee at Standard & Chartered and also got promoted as Area Sales Head.

While Aditya Birla started operating in the mortgage industry in Delhi in 2011, the business did not experience much success in its first year of operations. Atul joined the Aditya Birla Mortgage Team in 2012 and his first major disbursement amounted to a huge Rs. 29 crores. Not only was he rewarded for his commitment to generating business, Atul also received accolades by successfully participating in various contests across the country. His relentless work ensured that he was singlehandedly contributing close to 90% of the business being generated in the Delhi Branch. This was rewarded as he became the Delhi Branch Head in 2015 and coincidentally the Branch also became the “Best Performing Branch” in India that year itself. Awards and accolades followed including the Exceptional Leader and Udaan Awards that were bestowed upon him.

His never-say-die attitude and persistence brought him success, and in 2019 he became the Zonal Sales Head of Aditya Birla Group.

Atul Tiwari, a living example of a successful person shaped by attitude, dedication, work and persistence, is also a complete family man. He is ensuring that his child retains the core values that made him what he is today.