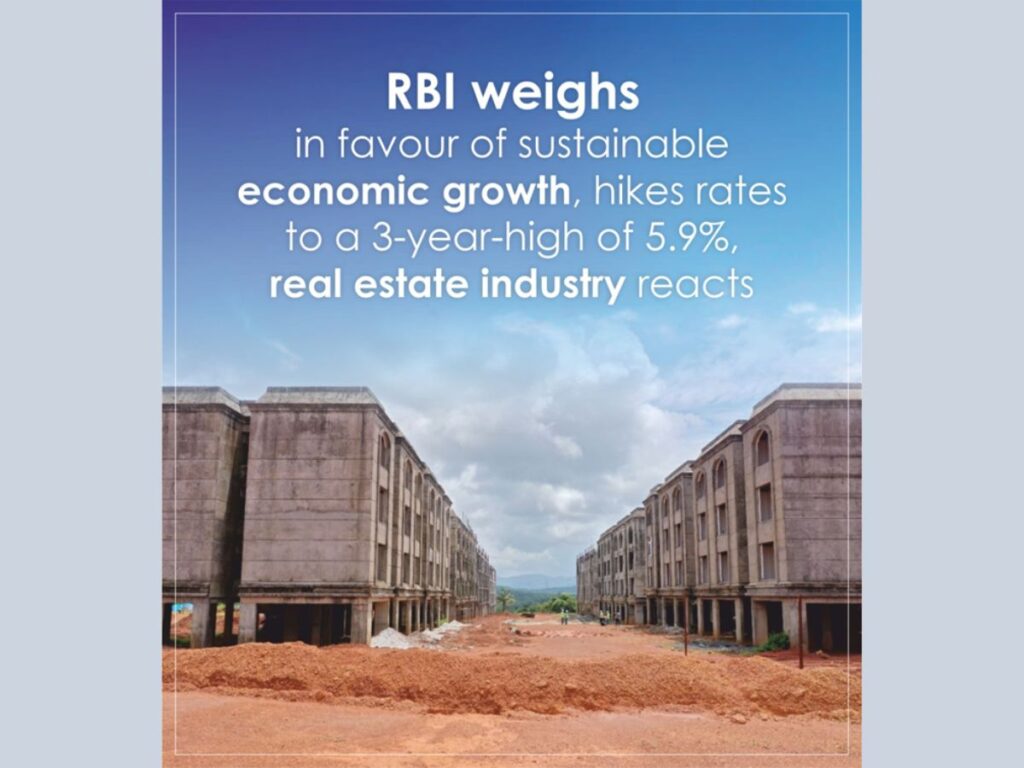 New Delhi, October 4, 2022: RBI’s monetary policy committee (MPC), which determines interest rates, opted to raise the policy repo rate by 50 basis points to 5.9 per cent with immediate effect. This decision was taken after three days-long sessions that concluded on September 30.

At the post-monetary policy press conference, the RBI governor said, “There are two components in the monetary policy framework – growth and inflation. MPC decisions are based on twin objectives, with primacy given to price stability.

RBI has also lowered its GDP growth forecast for the current financial year to 7 per cent from an earlier estimate of 7.2 per cent. Inflation has been a major concern and has been maintained at 6.7%. This is the fourth consecutive hike in repo rates, following the 40 basis points increase in May, and 50 basis points hike each in June and August. Analysts have voiced that there may be another hike in December. While these steps seem necessary but they may thwart the growth momentum, especially in the real estate sector.

Commenting on the current hike, Aditya Kushwaha, CEO and Director Axis Ecorp says, “In recent times, RBI has been adopting measures to curb inflation and ensure sustainable economic growth. Today’s announcement to increase the repo rate by 50 basis points is in line with this. However, it will have a cascading impact on the interest rates and MSMEs’ borrowing expenses will also swell. Despite the increase in the rates, the market sentiments in the real estate sector continue to be positive. We believe that the festive offers and discounts with help mitigate the impact of the current hike and are hoping that once the inflation is checked, these rates will be relooked at.”

Mr Vinit Dungarwal, Director, AMs Project Consultants, remarks, “The last two years have been difficult for the real estate industry, things had just started to settle in. The real estate industry was banking on the festive season to drive the demand further across all industries. The current hike in the repo rate will pinch the homebuyers and make homeownership slightly harder. The rising inflation is already impacting the prices of everyday commodities such as petrol, gas and food prices, etc., and the interest hike will hurt the sentiments even further.”

Dr. Samantak Das, Chief Economist and Head of research and REIS, JLL, India says, “The repo rate hike does not augur well for the real estate sector, especially the residential segment as it will result in increased mortgage rates. The transmission of change in repo rate is based on an individual bank’s decision. Since April 2022, RBI increased the repo rate by 140 bps, while home loan rates moved up by an average of 80 bps – more than 50% has been transmitted to date. Taking a cue from the previous transmission, we expect the home loan interest rates to go up in the range of 25-30 bps. However, the interest rate after this hike would be still below what the homebuyers had to pay 8 to 9 years back- more than 10%. It is likely that banks might also delay the transmission, taking into account higher housing demand during the festive season.”

The current rate hike by RBI follows the US Federal Reserve affecting the third consecutive 0.75 percentage point rate increase, taking its benchmark rate to a range of 3-3.25 per cent earlier this month.