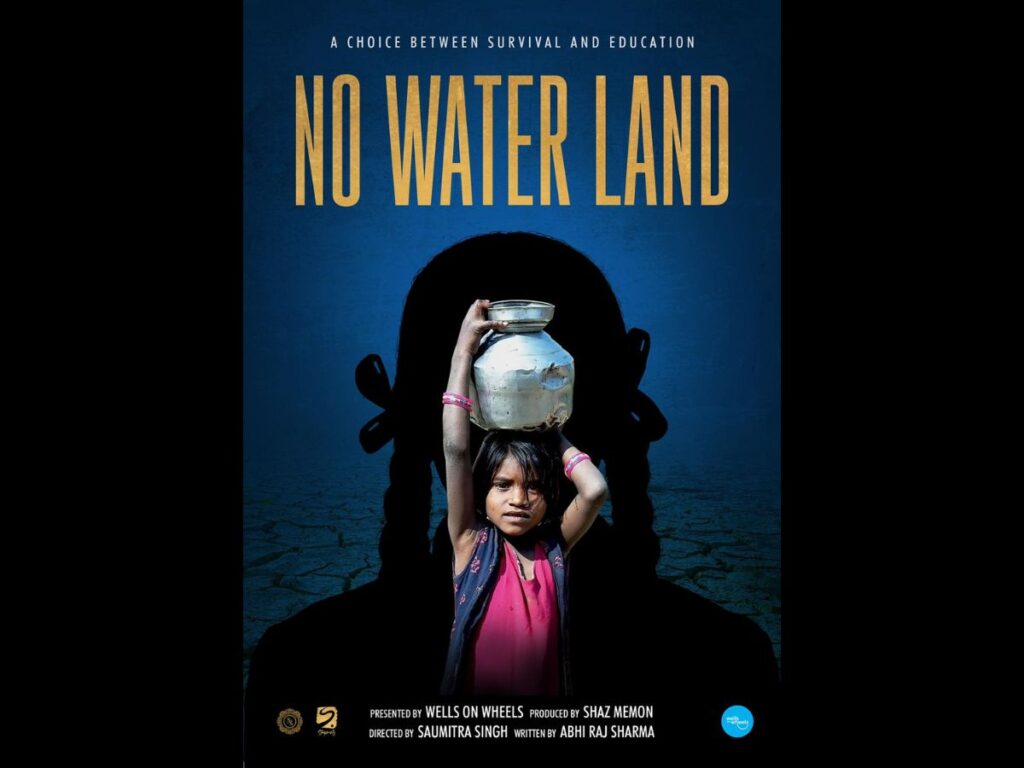 Mumbai (Maharashtra) [India], August 17: Childhood is meant to enjoy life fully and study in school. But in many parts of India, girls are burdened with collecting water for their household at a very tender age. And in the bargain, they not only lose their innocence but are forced to miss schools and education, which is very important for their all-around growth. Documentary film in the making ‘No Water Land’ reflects the sad realities of such young and innocent girls from rural India.

Award Winning Director Saumitra Singh and storyteller Abhi Raj Sharma have partnered with producer Shaz Memon to make ‘No Water Land’, which shows the hard lives of girls who are made to choose between survival and getting an education for a better future.

The young and dynamic director Saumitra Singh unveiled the title of his documentary project ‘No Water Land’, which captures the incredible true story of a UK-based philanthropist Shaz Memon. His NGO ‘Wells on Wheels’ works relentlessly for the welfare and education of the young girls from Maharashtra who have been deprived of the basic educational needs due to water collection needs for their families.

Producer of the documentary Shaz Memon says, “Every child has a dream, but every child doesn’t get the opportunity to pursue that dream. I want to change that for all the young girls in rural India who are unfairly trapped in a vicious circle of water collection. Their sacrifice goes beyond losing out on childhood and creating health issues for themselves. For most of them, carrying water on their head is a necessity they can’t escape due to their circumstances, which means there is no option but to miss out on education. That’s a significant burden on any  innocent young child.”

Director Saumitra Singh said, “I was moved after hearing the heart-wrenching stories of these young girls who have to travel 3-4 kilometres twice a day with heavy pots on their heads to collect water for their households. These duties have pushed them away from education and other normal activities related to their overall growth. And all this is happening just 150 Kilometres away from a metropolitan city like Mumbai. This scenario shocked me, so I decided to share their stories with the world.”

Saumitra and his team have completed the recce for the shoot, and now the project is in the pre-production stage. He says that he is grateful to Sanjay Kapoor, who referred him to the makers and was also the brand ambassador of ‘Wells on Wheels’. Saumitra added, “We recently concluded a feature film with Sanjay, sir, and I’m thankful to him for allowing me to be a part of this social project. I’m grateful to have Shaz Memon guiding me through this and Nashik’s ‘Wells on Wheels’ team. These people are doing an incredible job.”

Shaz Memon’s NGO ‘Wells on Wheels’ will be producing the documentary in association with Shukar Studios and Shiprartz overseeing the production, while Saumitra Singh will direct it. Hasan Khan is associated with the project as an Executive Producer. Abhi Raj Sharma has taken the responsibility to weave the documentary focussing on the plight of the girls.

Saumitra Singh, who has previously worked with Naseeruddin Shah on his first short film, ‘The Wallet’, which won 70+ awards, is also awaiting the release of his next film ‘Taxi No 24’ with Mahesh Manjrekar and  ‘The House of Lies’ with Sanjay Kapoor.

The director of Shiprartz and writer of the documentary Abhi Raj Sharma expressed his gratitude for being a part of this noble cause. He said, “I started this company with my partners Amaninder Singh and Manbir Sandhu to produce stories which are organically rooted in India, but I never thought we would be narrating this heart-wrenching tale of young girls who have to choose between survival and education.”