Celebrations of FIFA stemming from the flame of Commitment and Passion: Dr Mohammed Khan 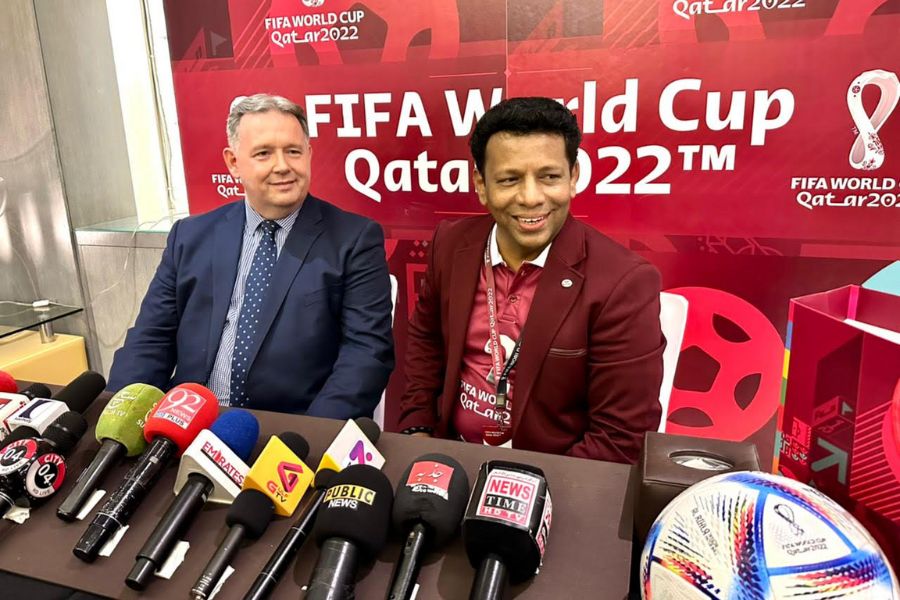 December 13: Football is a game of connecting hearts and uniting humans. It has proved to bring about world peace. We all feel excited and enjoy the game, but at a deep level what’s happening? Is there is union and harmony? Qatar, have done their best to meet up to the expectations of barmy armies all over the World. As the most competent hosts, they have grown up to create a history, despite being the first country in the Middle East to host the same. FIFA World Cup, Qatar 2022 has created an indelible impression in the minds of football lovers, especially with the customary Arab hospitality and winter weather that is perfect for playing and watching the beautiful game.

All this never comes without preparation and involvement blended with dedication, that is exactly what Dr. Mohammed Khan who is a very well known personality in the international high society forum does.

Dr. Mohammed Khan, The President of Khans Media City, who is the mastermind behind the Media Plans designs, promotions and production of the marketing tools, publishing official magazine, branding aircraft, vehicle graphics for last four FIFA World Cups, reflect on this in an innovative manner.  He has put his heart and soul in the designing and conceptualization which invokes a fragrance of celebration. As a fan of FIFA himself, he knows the pulse of what a true fan seeks and sees the million smiles as he simply uses his creative genius to unleash the wholesome experience.

Dr. Khan opined that in the case of India, the Blue Tigers have not participated in a World Cup and have not won any significant awards for a very long time. Also, there have been considerable distinctions in the priorities given at a legislative level to each game. Moreover, India hasn’t yet attempted to address the necessities of becoming a host. Being a nation with more than a billion football enthusiasts, one question that always arises about India is that why is India still at six ‘o clock in hosting an event like FIFA World Cup, that too even after a lot of Indians, working behind the curtains to make the game more popular. Another question that precedes this one is why the Indian team fails to qualify for the world cup.

In the words of Dr. Khan, a few crucial issues need to be addressed in this regard. The infrastructure of the stadiums needs to be improved in order to build a few more elite venues that can pass FIFA’s exacting standards. To enable supporters to travel throughout the huge nation from game to game, the transportation system would also need to be improved. A comprehensive system to ensure that each person visiting India, in connection with the FIFA World Cup can have a proper gratification of their goals is to be brought about, in all aspects. To put it simply, the system requires significant adaptation in order to match the mental representations of the fan community, much like the other hosts did.

A true Indian himself, and a hardcore football enthusiast, Dr. Khan also awaits that day, when India will also become a host to FIFA World Cup. He has also started his work to bring these issues to the attention of the Sports ministry, eminent Indian footballers and the political leadership of India. He has started playing his part in bring Indian Football to the forefront in the international sports arena; and, now the ball is in the court of the concerned authorities.